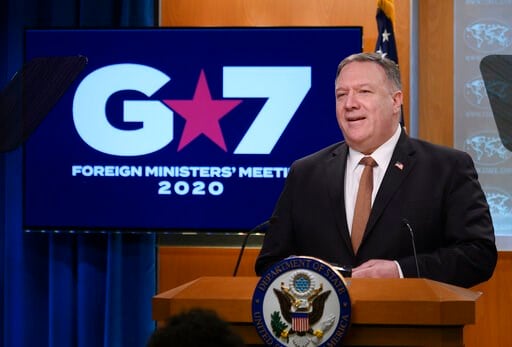 (Andrew Caballero-Reynolds/Pool Photo via AP). Secretary of State Mike Pompeo speaks during a news conference at the State Department on Wednesday, March 25, 2020, in Washington. Pompeo said Wednesday that the Group of Seven members were all aware of C... 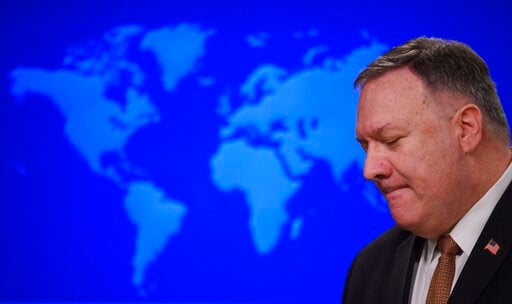 (Andrew Caballero-Reynolds/Pool Photo via AP). Secretary of State Mike Pompeo speaks during a news conference at the State Department on Wednesday, March 25, 2020, in Washington. Pompeo said Wednesday that the Group of Seven members were all aware of C...

WASHINGTON (AP) - Foreign ministers from the Group of 7 leading industrialized democracies sparred Wednesday over whether to call out China as the source of the coronavirus pandemic.

Meeting by video conference because of the outbreak, the ministers agreed on the need for joint efforts to halt the spread of the novel coronavirus, which causes a disease being called COVID-19. But U.S. and European diplomats said the ministers were unable to agree on Secretary of State Mike Pompeo's call for the virus to be identified by name as the “Wuhan virus.”

European officials said Pompeo had insisted on identifying the COVID-19 virus as the “Wuhan virus” even though the World Health Organization and others have cautioned against giving it a geographic name because of its global nature. In recent weeks, Pompeo has stepped up his use of “Wuhan virus," accusing China of putting the world at risk by not revealing more details about the outbreak, which was first reported in the city of Wuhan.

President Donald Trump had until very recently frequently referred to the novel coronavirus as the “China virus” or the “Chinese virus," but since the beginning of this week has steered away from those terms as critics have said they foster discriminatory sentiments and behavior against Asians and Asian Americans.

In a solo news conference after the meeting, Pompeo again referred to the “Wuhan virus," saying it was “the most pressing agenda item." He said all the foreign ministers had “committed to fighting (it) with transparency, as is necessary all around the world.” He did not deny there had been disagreements over what to call the virus, but said all the ministers had acknowledged that China had not been forthcoming about its details early on and was now trying to shift the narrative about it.

“Every one of the nations that was at that meeting this morning was deeply aware of the disinformation campaign that the Chinese Communist Party is engaged in to try and deflect from what has really taken place here,” Pompeo said.

Other foreign ministers were not nearly as emphatic in their own comments about the meeting, with at least one leaving open the suggestion that China is not the only country trying to use the outbreak to advance political points.

French Foreign Minister Yves Le Drian said in a statement that he had “underscored the need to combat any attempt to exploit the crisis for political purposes and expressed the view that the unity of all in order to effectively combat the pandemic must now take precedence over any other considerations.”

The disagreement over the virus terminology was first reported by the German publication Der Spiegel. German officials said they were more concerned about what would come from a virtual summit of the Group of 20 nations leaders that is supposed to be held on Thursday at the request of Saudi Arabia.

U.S. officials meanwhile downplayed the disagreement among the foreign ministers and pointed to the G-7 finance ministers' statement from Tuesday that did not mention either “Wuhan” or “China” in relation to the virus and instead referred to it repeatedly as the COVID-19 virus.

Copyright 2020 The Associated Press. All rights reserved. This material may not be published, broadcast, rewritten or redistributed without permission.