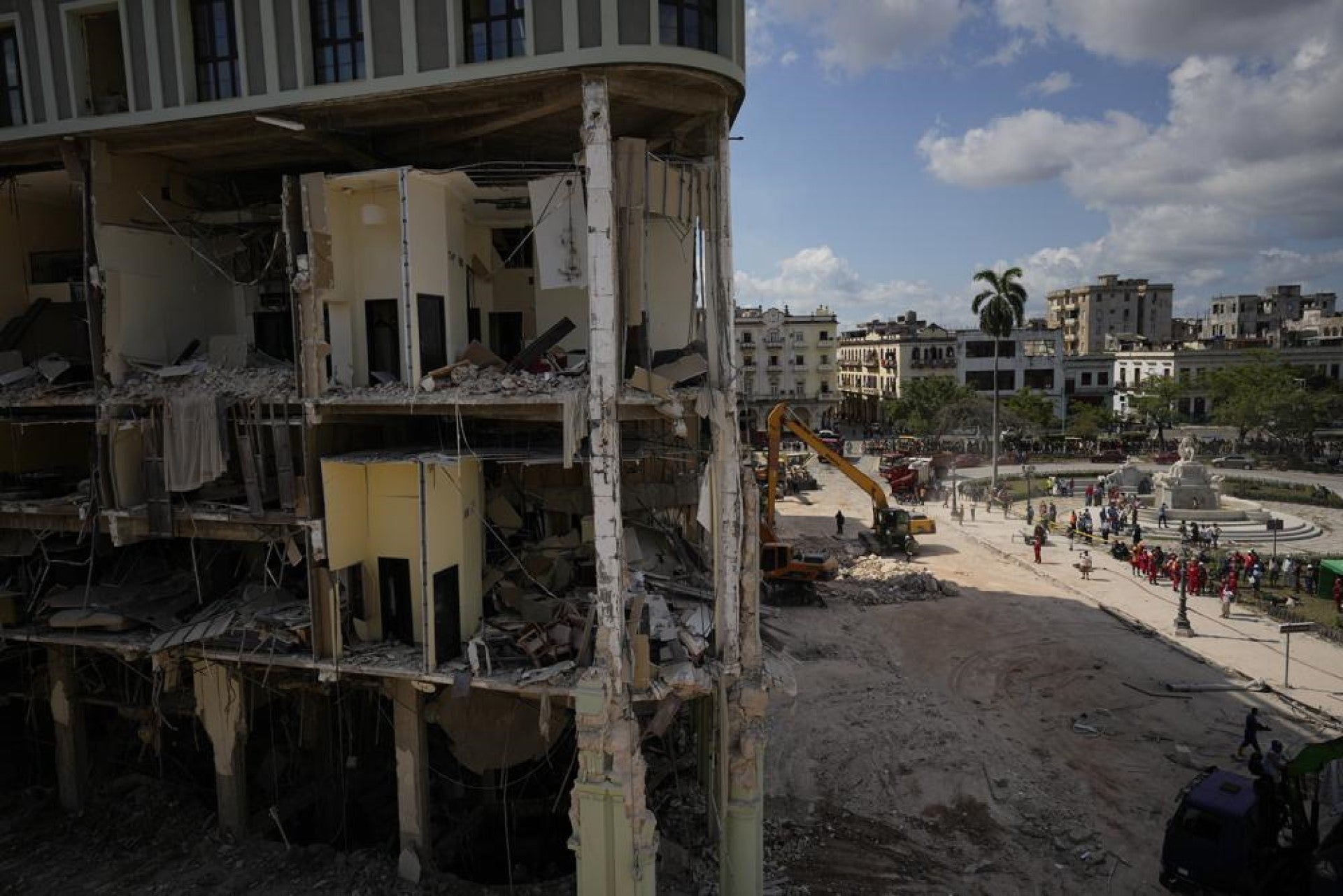 Search crews with dogs hunted through the ruins of a luxury hotel in Cuba's capital Sunday for survivors of an apparent gas explosion and officials raised the number of known dead to 30.
The Hotel Saratoga, a five-star 96-room hotel in Old Havana, was preparing to reopen after being closed for two years when an apparent gas leak caused a massive explosion on Friday.
Cuban officials on Sunday raised the known death toll to 30 from 27 even as crews continued to search for victims of the blast that sheared outer walls from the building and damaged several nearby structures, including the historic Marti Theater and the Calvary Baptist Church, the headquarters for the denomination in western Cuba.
The Health Ministry said 84 people had been injured The dead included four minors, a pregnant woman and a Spanish tourist, whose companion was seriously injured.
Some 24 people remained hospitalized, according to the Health Ministry.
On Saturday, a representative of Grupo de Turismo Gaviota SA, which owns the hotel, said 13 of its workers remained missing. Gov. Reinaldo García Zapata said Saturday evening that 19 families had reported loved ones missing and that rescue efforts would continue.
Authorities said the cause of the explosion was still under investigation, but believed it to have been caused by a gas leak. A large crane hoisted a charred gas tanker out of the rubble Saturday.
The explosion is another blow to the country’s crucial tourism industry.
Crews busily worked to clean up the surrounding streets and by late Saturday, substantial pedestrian traffic had resumed. Some nearby buildings were also heavily damaged by the explosion that blew out windows and rattled walls.
Even before the coronavirus pandemic kept tourists away from Cuba, the country was struggling with tightened sanctions imposed by former U.S. President Donald Trump and kept in place the Biden administration. Those limited visits by U.S. tourists to the islands and restricted remittances from Cubans in the U.S. to their families in Cuba.
Tourism had started to revive somewhat early this year, but the war in Ukraine deflated a boom of Russian visitors, who accounted for almost a third of the tourists arriving in Cuba last year.
Attention began to shift to an official visit by Mexico President Andrés Manuel López Obrador, who arrived in the capital Saturday night. López Obrador was wrapping up a five-country tour that began in Central America.
Cuba President Miguel Díaz-Canel visited Mexico during its independence day celebrations last year. López Obrador has recently spoken out against the apparent U.S. government intention of excluding Cuba, Venezuela and Nicaragua from the Summit of the Americas it will host in Los Angeles in June.
(Copyright 2022 The Associated Press. All rights reserved. This material may not be published, broadcast, rewritten or redistributed without permission.)
5/8/2022 12:13:03 PM (GMT -4:00)
Related Stories
2h ago

Festival of the arts in Oceanside shines light on Parkinson's disease