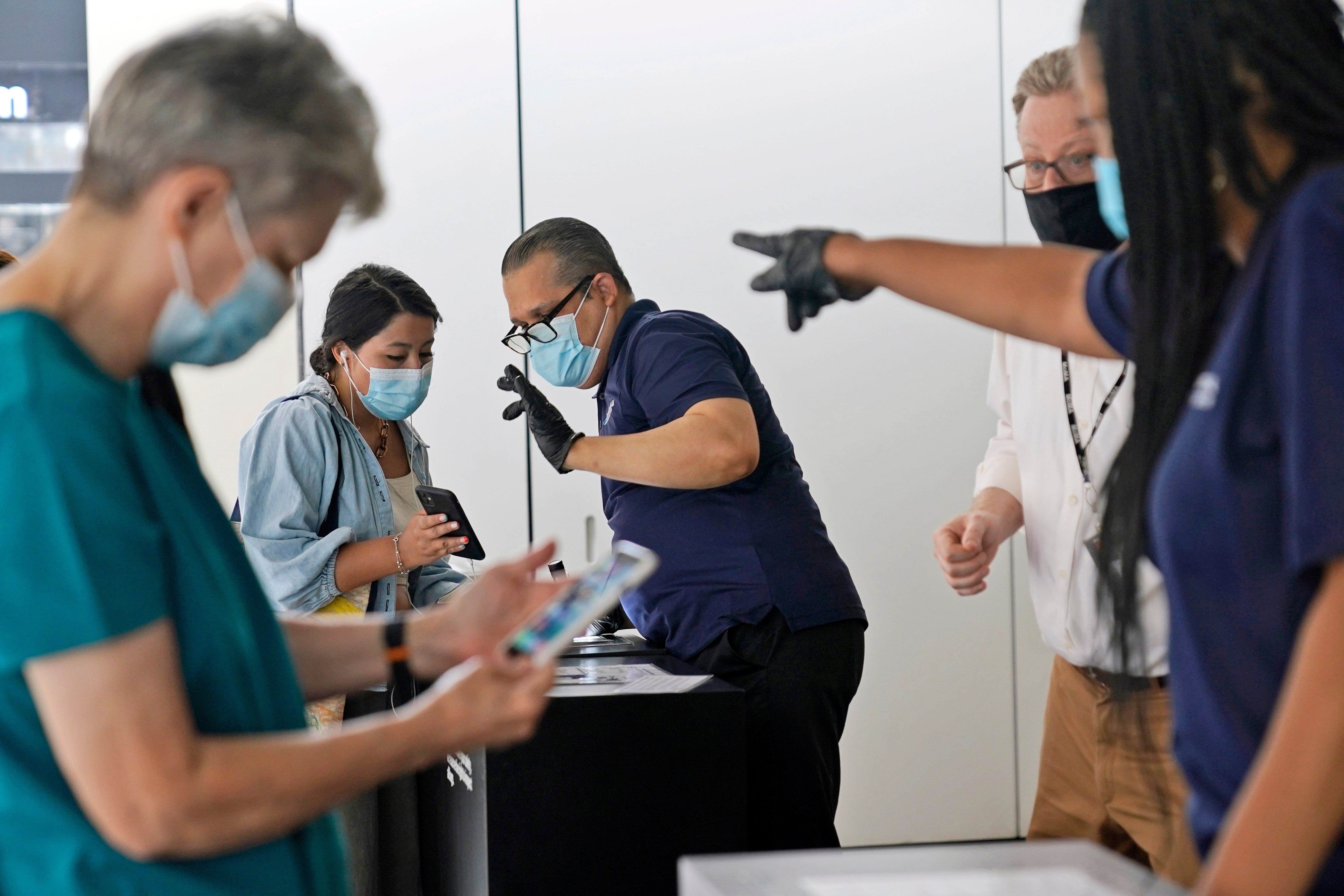 The World Health Organization says it could still take some time to get a full picture of the threat posed by omicron, a new variant of the coronavirus as scientists worldwide scramble to assess its multiple mutations.
Stock markets swooned, some public gatherings got canceled, and countries across the globe suspended incoming flights after scientists in South Africa last week identified the new version that appears to have been behind a recent spike in COVID-19 infections in the country’s most populous province.
Over the weekend, the list of countries that have spotted the new variant in travelers grew. Portugal detected 13 cases linked to the new variant among members of a single soccer club — only one of whom had recently traveled to South Africa.
On Friday, WHO designated it as a “variant of concern,” its most serious designation of a COVID-19 variant, and called it “omicron” as the latest entry into its Greek alphabet classification system designed to avoid stigmatizing countries of origin and simplify understanding.
___

WHAT DO WE KNOW ABOUT OMICRON?

By Sunday, U.N. health agency issued a statement on omicron that boiled down to: We don't know much yet.
It said it wasn't clear whether omicron is more transmissible — more easily spread between people — compared to other variants like the highly transmissible delta variant. It said it wasn't clear if infection with omicron causes more severe disease, even as it cited data from South Africa showing rising rates of hospitalization there — but that could just be because more people are getting infected with COVID-19, not specifically omicron.
From just over 200 new confirmed cases per day in recent weeks, South Africa saw the number of new daily cases rocket to more than 3,200 on Saturday, most in Gauteng, the country’s most populous province.
Now, up to 90% of the new cases in Gauteng are caused by it, according to Tulio de Oliveira, director of the KwaZulu-Natal Research Innovation and Sequencing Platform.
“There is currently no information to suggest that symptoms associated with omicron are different from those from other variants,” WHO said. It said there's no evidence — yet — that COVID vaccines, tests and treatments are any less effective against the new version.
___

WHY ARE SCIENTISTS WORRIED ABOUT THIS NEW VARIANT?

So far, the main difference with other variants appears to be that there may be an increased risk of reinfection with omicron — in other words, that people who’ve already had COVID-19 could get reinfected more easily.
The variant appears to have a high number of mutations — about 30 — in the coronavirus’ spike protein, which could affect how easily it spreads to people.
Some experts say that could mean that vaccine makers may have to adapt their products at some point.
Sharon Peacock, who has led genetic sequencing of COVID-19 in Britain at the University of Cambridge, said the data so far suggest the new variant has mutations “consistent with enhanced transmissibility,” but said that “the significance of many of the mutations is still not known.”
Lawrence Young, a virologist at the University of Warwick, described omicron as “the most heavily mutated version of the virus we have seen,” including potentially worrying changes never before seen all in the same virus.
___

Scientists know that omicron is genetically distinct from previous variants including the beta and delta variants, but don't know if these genetic changes make it any more transmissible or dangerous. So far, there is no indication the variant causes more severe disease.
It will likely take weeks to sort out if omicron is more infectious and if vaccines are still effective against it.
Peter Openshaw, a professor of experimental medicine at Imperial College London said it was “extremely unlikely” that current vaccines wouldn’t work, noting they are effective against numerous other variants.
Even though some of the genetic changes in omicron appear worrying, it’s still unclear if they will pose a public health threat. Some previous variants, like the beta variant, initially alarmed scientists but didn’t end up spreading very far.
“We don’t know if this new variant could get a toehold in regions where delta is,” said Peacock of the University of Cambridge. “The jury is out on how well this variant will do where there are other variants circulating.”
To date, delta is by far the most predominant form of COVID-19, accounting for more than 99% of sequences submitted to the world’s biggest public database.
___

HOW DID THIS NEW VARIANT ARISE?

The coronavirus mutates as it spreads and many new variants, including those with worrying genetic changes, often just die out. Scientists monitor COVID-19 sequences for mutations that could make the disease more transmissible or deadly, but they can't determine that simply by looking at the virus.
Peacock said the variant “may have evolved in someone who was infected but could then not clear the virus, giving the virus the chance to genetically evolve,” in a scenario similar to how experts think the alpha variant — which was first identified in England — also emerged, by mutating in an immune-compromised person.

Depends on who you ask.
Israel is banning foreigners from entering the country and Morocco stopped all incoming international air travel. Scores of countries in Europe, North America, Africa and beyond restricted flights from southern Africa.
Given the recent rapid rise in COVID-19 in South Africa, restricting travel from the region is “prudent” and would buy authorities more time, said Neil Ferguson, an infectious diseases expert at Imperial College London.
But WHO noted that such restrictions are often limited in their effect and urged countries to keep borders open.
South Africa’s government said the country was being treated unfairly because it has advanced genomic sequencing and could detect the variant quicker and asked other countries to reconsider the travel bans.
Related Stories

Health officials: COVID-19 hospitalizations from Omicron peaked about 2 weeks ago

FDA curbs use of antibody drugs sidelined by Omicron

FDA curbs use of antibody drugs sidelined by Omicron

The New Normal: Is the Omicron surge almost over?

Study: Most COVID-19 vaccine side effects attributed to placebo effect