By: News 12 Staff
TENS OF THOUSANDS OF DOLLARS IN FINES
The staff members at Kirvens, a bar on Lydig Avenue in the Bronx, say they're facing tens of thousands of State Liquor Authority fines, which could mean the end to their small business.
The inspection was conducted after hours, and was on surveillance video, exclusively obtained by News 12.
Exclusive video of SLA inspectors at Kirvens
The SLA accused the staff at Kirvens of not wearing masks, among other charges, like an unmounted fire extinguisher and a broken light socket.
SEE THE VIOLATIONS
In additional video, you can see Kirvens staff wearing their masks during the inspection, which happened in November 2020.
This video of the SLA inspection shows Kirvens employees wearing masks.
A photo obtained by News 12 also shows that the front gate was half lowered when the officers came in, and time codes prove the bar was closed at the time. Curfew for bars and restaurants was, at the time, 10 p.m. 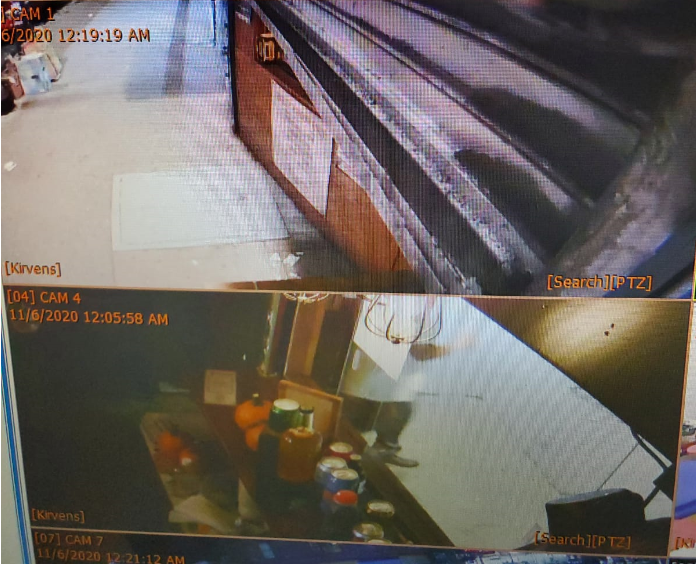 Photo of the gate drawn down at Kirvens.
This photo taken at the same time, shows an employee taking in their last piece of outdoor furniture for the night.
Additional video captures Kirvens staff turning their lights on again and off again, pleading with the inspector that they were in fact, closed.
Lights turned off during the inspection
The SLA says that because the door was raised, even slightly, that they had enough evidence to prove the bar was open and were able to continue the inspection.
Kirvens staff says this idea is unfair -- adding that inspecting a business while they’re closed cannot be representative of how they function normally.
A CHIN-STRAPPING MYSTERY MAN
A chin-strapping, unidentified man was captured on video, following the SLA agent into Kirvens, along with two NYPD officers.
He's also seen not wearing his mask properly indoors, while Kirvens was being written up for improper mask wearing themselves.
We asked the SLA who this man is. They say they have no idea. We inquired about body camera footage, and they told us that the body camera video does not show the mystery man. The SLA would not release the video to us, and instead suggested News 12 contact the NYPD for more information.
When we did, sending the NYPD a photo of the man, they could not identify him either.
An unidentified man, wearing his mask on his chin, accompanies inspectors.
A second view of the unidentified man, not wearing his mask properly indoors.
Now an attorney for Kirvens says it will either have to plead guilty and face upwards of $50,000 in fines, settle for a plea and pay $20,000 or go to trial and risk losing its liquor license.
BATTLING THE SLA
News 12 consulted our own, separate attorney, one who specializes in helping restaurants and bars to fight the SLA.
We learned that the State Liquor Authority is a reactionary institution and that they will inspect a business following a report from a local agency, like the NYPD.
We're told they will inspect a business and combine any/all of the charges into one ticket.
Violations are not tied to specific monetary fines, so the SLA will determine how much each licensee owes, according to our expert. Dozens of businesses have voiced to News 12 that this process is both unfair and extremely arbitrary.
SLA licensees can appeal the violations against them. Sources tell News 12 that a restaurant or bar would have to disprove all the violations together, as a wholesale ticket, rather than each individually. Our experts say that this means a bar can be accused of having an unmounted fire extinguisher and also face mask violations, but unless they can disprove both, the ticket stands.
If enough evidence is issued by the SLA to support their claims against a small business, and the business wants to dispute the claims, that establishment is offered one of three options.
• Not Guilty: The violation goes to a civil hearing where a judge will hear testimony from both parties.
• No Contact: A license holder can make a statement in hopes of lessening the charges against them.
• Conditional No Contest: A license holder admits guilt to the violation in exchange for penalties that are lesser than the maximum or that do not exceed a certain amount. This option is similar to a plea deal in criminal court.
Many restaurants report to News 12 that fighting SLA fines almost ensures an unaffordable fine or the loss of their liquor license.
THE SLA'S RESPONSE
“The licensee was charged after an SLA investigator documented violations of Covid-related regulations on November 5th, a time when the state was experiencing a dangerous surge in cases. On a typical day last November, investigators conducted hundreds of inspections nightly, finding 99% of bars and restaurants in compliance with public health rules to keep their employees and neighbors safe, and it is unfortunate this establishment chose not to. It remains the strict policy of the SLA that all employees follow proper protocol with regard to face coverings and we have every reason to believe that all SLA employees did so here."
Additionally, News 12 submitted a freedom of information (FOIA) request with NYS SLA to obtain the body camera footage showing the mystery man. That request was denied pending possible appeal.
Text and reporting by Sabrina Franza.  Follow her on Twitter.
Watch Part 1 of the Fined Dining report
Watch Part 2 of the Fined Dining report
Related Stories

Turn to Tara: Job offer too good to be true? Employment scams are spiking. Here's how to avoid them.

Turn to Tara: Could your car be tracking you?

Turn to Tara: Job offer too good to be true? Employment scams are spiking. Here's how to avoid them.

Turn to Tara: Could your car be tracking you?

KIYC: Owners of Chevy Bolt vehicles frustrated due to battery problems. Here’s what to do.

Turn to Tara: Police data shows AirTag stalking is a growing problem. Here's how you can avoid being tracked.