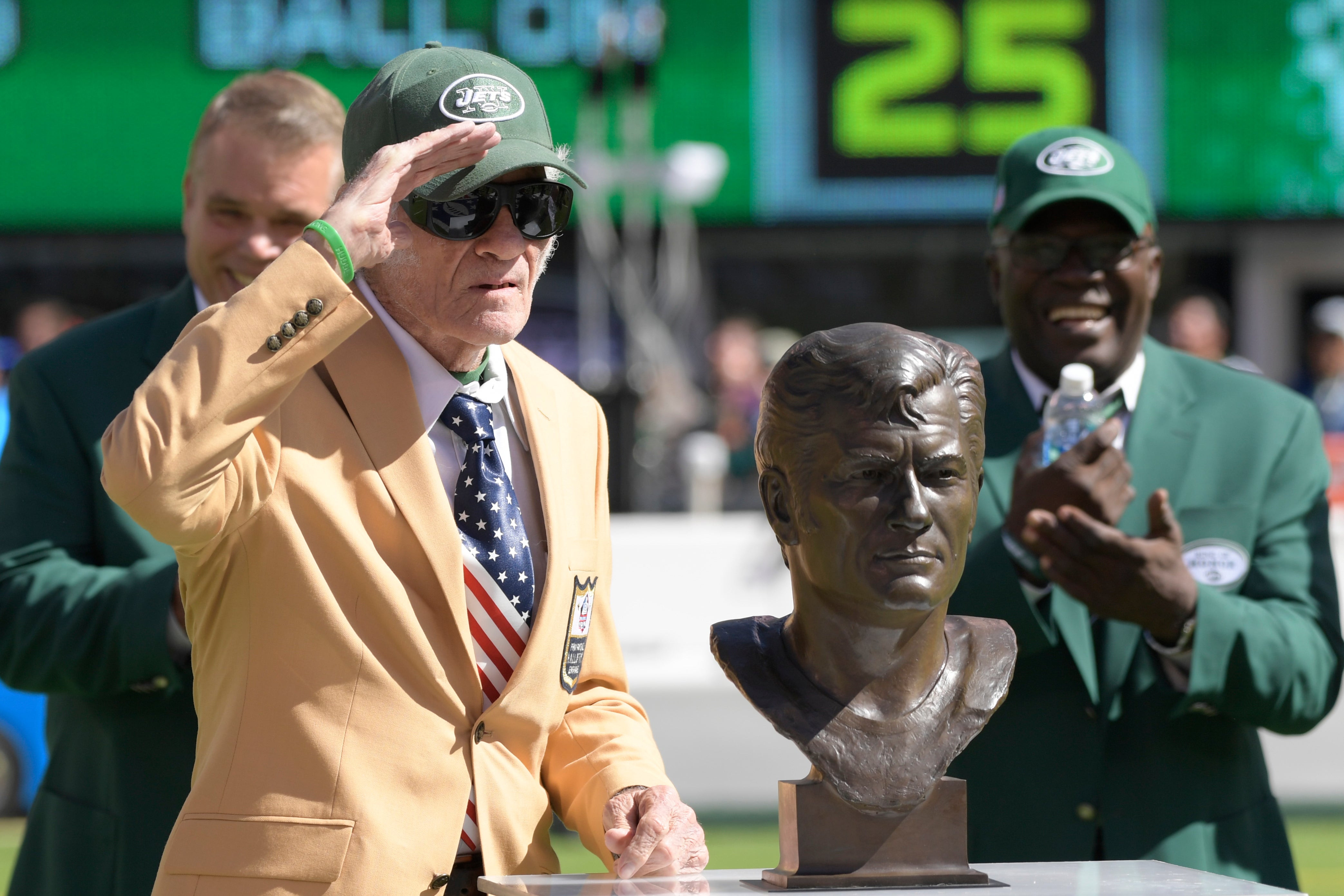 Don Maynard, a Hall of Fame receiver who made his biggest impact catching passes from Joe Namath in the wide-open AFL, has died. He was 86.
The Pro Football Hall of Fame confirmed Maynard's death on Monday through his family.
Maynard was the main target for Namath with the New York Jets, though a leg injury made him less effective in the team’s stunning upset of the NFL champion Baltimore Colts in the 1969 Super Bowl. That game established the credibility of the newer league, but Maynard had proven himself long before that.
After an unproductive one-year stint with the New York Giants in 1958, the slim, deceptively fast Texan headed to Hamilton of the CFL for 1959. Then the AFL was established, and he was the first player to sign with the New York Titans, who soon would become the Jets.
Even though the Titans/Jets went through a series of mediocre quarterbacks in their early years, Maynard made his mark, including two 1,000-yard receiving seasons. And when Namath showed up in 1965 with a record contract and huge headlines, one of the league’s top passing combinations was born.
Namath’s best skill was throwing the deep ball, matching Maynard’s main talent. As Broadway Joe’s primary target, Maynard had three seasons with at least 1,200 yards receiving in a four-year span. He caught 14 touchdown passes in Namath’s rookie season, and twice more had 10 TDs in a season.
When he retired in 1973 after one season with the St. Louis Cardinals, he was pro football’s career receiving leader with 633 catches for 11,834 yards and 88 touchdowns. In 1987, he was elected to the Hall of Fame.
“Our Pro Football Hall of Fame family mourns the passing of Don Maynard,” said Jim Porter, president of the hall. “He was a resilient man on and off the field - and someone that his teammates could always count on.”
Maynard sometimes humbly assessed his career, and other times pointed out how much his achievements meant to him.
“I don’t really look at it like I’m the greatest receiver,” he once said. “After you play a while anybody can break certain records. Longevity is the key. The record I’m proudest of is being the first guy to get 10,000 yards in receptions. Others may do it but I’m the first, and only one guy can be the first.”
Unlike Namath, Maynard, who never worn a chinstrap because it felt uncomfortable, wasn’t made for the spotlight. He preferred ranch life back home in Texas to the bright lights of Manhattan. But his game, based on speed - he claimed he was never caught from behind once he made a catch - and excellent hands made him stand out.
Not as much as Namath, of course, but Maynard made four AFL Pro Bowls and the AFL’s only All-Decade squad. Maynard’s defining performance was against Oakland in the 1968 AFL championship game at a frigid Shea Stadium. He drew double coverage from the Raiders’ superb secondary, yet caught six passes for 118 yards and two scores. His 6-yarder in the fourth quarter provided the winning points, sending the Jets to their only Super Bowl.
“Don was unstoppable that day,” Namath recalled. “On the long pass (52 yards), he made an over-the-shoulder grab after the wind got the ball. It was the biggest play of the game.”
Maynard spent much of the Super Bowl win that was guaranteed by Namath as a decoy because of a sore leg, and didn’t catch a pass. Early in the game, though, he ran a deep route and got open; the pass barely missed his hands. The Colts respected his speed the rest of the way, often with double teams on the hobbled Maynard while New York’s other wideout, George Sauer, had a big game.
“I knew right away in the Super Bowl that I wasn’t going to catch any balls,” he once told Football Digest. “All I had to do was run, and stride, and clear out, and have a good day in that respect.
“I had a sore hamstring, but I stayed out the last game of the season against Miami. I lost the yardage receiving title by 15 yards to Lance Alworth. But I tell people, ‘I traded 15 yards for the yardage title for $15,000 in the Super Bowl.’”
By BARRY WILNER
Related Stories

Yankees place RHP Holmes on injured list with back soreness

Football on the mind ahead of Pinstripe Bowl

Mets’ Carrasco likely out up to a month with oblique strain

AP source: Jets’ Wilson has no additional damage to knee

Yankees place RHP Holmes on injured list with back soreness

Football on the mind ahead of Pinstripe Bowl

Mets’ Carrasco likely out up to a month with oblique strain