By: News 12 Staff
Milford police have released security camera pictures of three young men who they say made off with $15,000 worth of narcotics in a brazen theft at a Rite Aid Tuesday afternoon. It happened just before 4:30 p.m. at 1360 Boston Post Road.
Police said the group walked in and went straight to the pharmacy, where two of the suspects jumped the counter looking for cough medicine. 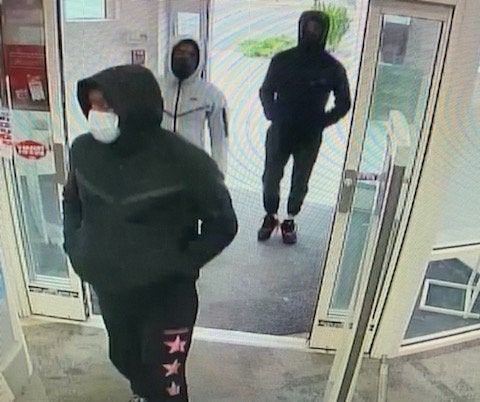 Photo courtesy of Milford Police Facebook page.
“When they didn't have it, they ordered the pharmacist to open the safe,” said PFC Marilisa Anania. “Then the two males emptied $15,000 worth of narcotics out of the safe and handed it to the third male that was on the other side of the counter.” 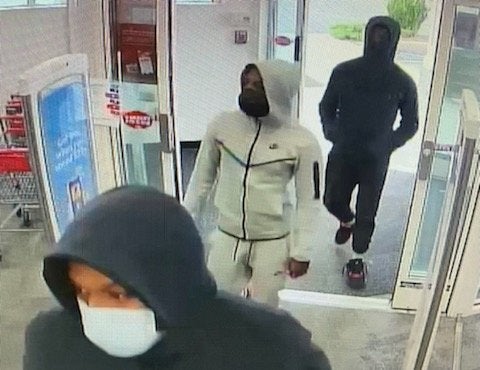 Photo courtesy of Milford Police Facebook page.
Police said the suspects then calmly walked out with a large shopping bag full of drugs. They drove off in a silver SUV, believed to be a newer Buick or Nissan, that had a white license place with blue lettering.
“There was never any weapons displayed. There was never any threats of weapons. There was no physical contact with the pharmacist. It was all verbal,” Anania said. “He complied, and they were able to get what they wanted and leave the store without anyone being injured.”

Photo courtesy of Milford Police Facebook page.
On Tuesday, it appeared to be business as usual at Rite Aid. News 12 did notice the drop-off counter at the pharmacy was closed with the gate pulled down. Employees were not allowed to comment on what happened.
One customer from Milford said she’s been going to this pharmacy for 25 years. “For this to happen makes me sick to my stomach. They're such good, kind people in there. What is our country coming to?”
“Wow. It’s a surprise,” said Vin Gianfredi, a customer from West Haven, upon learning what happened. “The economy is making people do strange things I think a lot of us have never seen before.”
“Middle of the day sounds pretty insane, and to jump over the counter,” added Dylan Finer, of Trumbull. “Kinda scary stuff, and I feel for the employees of Rite Aid here.”
The suspects are believed to be behind two other similar pharmacy thefts yesterday right before the Milford one. Police in Orange said the men hit the Walgreens 3.5 miles away at 54 Boston Post Road. Assistant Chief Max Martins told News 12 two of the three men jumped over the counter and stole multiple bottles of cough syrup with codeine from the shelf while the third man acted as a lookout. Martins said they didn’t show any weapons and left in the same silver SUV. The trio allegedly also stole from a pharmacy in West Haven.
“We're working with other pharmacies in the city today to try to educate them on what happened, educate them on the suspects so that if they see anything or anything similar happens, they call us right away,” Anania said.
The suspects are described as in their late teens or early 20s. Police said they wore face masks, hoods and “Nike Tech” sweats during the thefts.
Anyone with information is asked to contact Milford Detective Catino at kcatino@milfordct.gov or 203-783-4729.
Rite Aid's corporate office issued a statement saying, "We're grateful no one was injured in Tuesday's incident and we are cooperating with local authorities in their investigation. We are also focused on supporting our associates who were on duty. Employee and customer safety is our top priority and we are committed to ensuring everyone feels safe in our stores."
Related Stories

NYPD: Man wanted for stabbing, robbing 2 victims in the Bronx