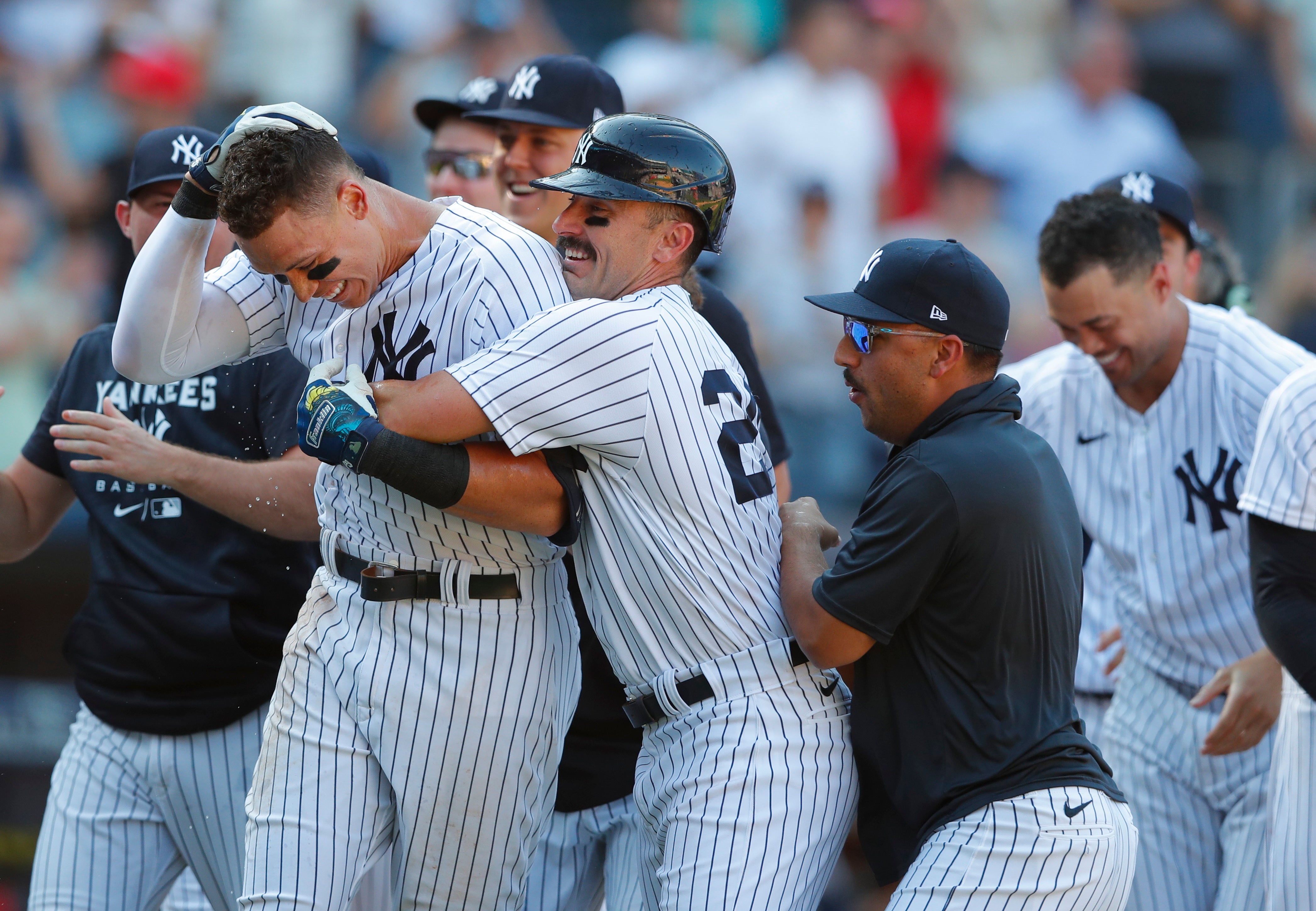 Aaron Judge walked over to the stands and gave his bat to Spike Lee, a Yankees fan famous for scripting Hollywood dramas.
This weekend's Astros-Yankees series had all the ups, downs and twist endings audiences could handle. And when baseball's award season arrives, bet on critics taking a hard look at Judge's leading role.
“I told him I have to quit taking him for granted,” manager Aaron Boone said.
Judge drove a three-run homer in the 10th inning for his second walk-off hit against the Astros in four days, and New York recovered after nearly being no-hit for the second consecutive game to beat Houston 6-3 Sunday.
“These guys, they never waver,” Judge said. “They stick to their plan, stick to their approach and continue to grind it out. And then Big G hit one about 120 to center, so it was all good.”
Giancarlo Stanton ended a historic hitless drought for New York with a one-out, 111 mph homer in the seventh inning, and DJ LeMahieu followed with a tying two-run drive in the eighth as New York split a four-game series between the AL's top teams.
“Ended up Judge 2, Us 2,” Houston manager Dusty Baker said.
After Michael King stranded the bases loaded in the 10th, Isiah Kiner-Falefa dropped a two-strike bunt that moved automatic runner Aaron Hicks to third. Right-hander Seth Martinez intentionally walked pinch-hitter Matt Carpenter and struck out LeMahieu, setting up a two-out showdown with the Judge.
Just like on Thursday, when he broke a 6-all tie with a single in the ninth, Judge lifted the major league-leading Yankees. His 112 mph rocket to left-center on a slider landed in the visiting bullpen for his big league-high 28th home run.
“What I marveled at was just how easy he swung,” Boone said. “It's like he's just trying to touch the ball.”
With their 10th walkoff win this year - and third from Judge - the Yankees improved to 53-20 and matched the third-best 73-game start in the majors since 1930, trailing only the 2001 Mariners and 1998 Yankees.
They are 24-1 when Judge and Stanton homer in the same game, including 8-0 this season.
“We got the best team on the planet,” Judge said.
They hardly hit like a juggernaut most of the weekend.
José Urquidy was eight outs from Houston's second straight no-hitter before Stanton connected, cutting the Astros' lead to 3-1. The Yankees had been 0 for 52 since the eighth inning of a 3-1 loss Friday night - a stretch including a combined no-hitter by Cristian Javier, Héctor Neris and Ryan Pressly on Saturday.
“You could tell they were coming at us with everything they had,” LeMahieu said.
New York’s 16 1/3-inning hitless drought was the longest by any team since at least 1961, according to the Elias Sports Bureau. No team has ever been no-hit in consecutive games, although the 1917 Chicago White Sox were no-hit on consecutive days by the St. Louis Browns - the second gem came in the second game of a doubleheader.
King (5-1) had to wriggle out of trouble in the 10th after New York’s defense slipped up twice. Shortstop Kiner-Falefa booted José Altuve’s grounder, and catcher Jose Trevino’s attempt to pick off Jason Castro at second base backfired when Castro took third.
King walked Alex Bregman with one out to load the bases, then retired Kyle Tucker and Yuli Gurriel. King reached 100 mph for the first time in his career during the at-bat against Bregman.
The Astros have become every bit as hated in the Bronx as the rival Red Sox after eliminating New York from the postseason three times since 2015 - including during their scandal-tainted title run in 2017. A crowd of 44,028 slumped in their seats most of the afternoon - the biggest cheers early on came for a cloud that briefly subdued the blazing afternoon sun.
Altuve hushed his harassers by hammering Nestor Cortes' first pitch, matching ex-teammate George Springer for the major league lead with seven leadoff homers. Mauricio Dubón added a two-run single in the fourth.
Altuve also walked twice and stole two bases.
Houston star Michael Brantley was replaced in the eighth inning with right shoulder discomfort. The five-time All-Star was 0 for 3, dropping his batting average to .288.
The Astros were also without slugger Yordan Alvarez, held out of the lineup with a lingering hand issue. He pinch-hit aganst Clay Holmes in the ninth inning and was intentionally walked.
The Yankees’ Gleyber Torres was stranded at third base in the ninth when he turned his right ankle and was easily picked off while writhing in the dirt. Boone said he has a mild sprain.
Stanek extended his AL-best scoreless streak to 19 1/3 innings. Martinez (0-1) had the second longest run at 17 2/3 innings prior to Judge's blast, helping Houston entered with a major league-best 2.63 ERA.
Baker said he didn't consider walking Judge, who had Anthony Rizzo hitting behind him. He also said Pressly and Neris weren't available after pitching Saturday.
Urquidy allowed the one hit over seven innings. He walked three and struck out three on 98 pitches.
“That's the best game he's thrown,” Baker said.
Plate umpire Mike Muchlinski took a foul tip off his mask in the first inning and staggered back before being grabbed by Yankees catcher Jose Trevino. Muchlinski consulted with a trainer and the rest of the umpiring crew before remaining behind the plate. The game was completed with three umpires.
By JAKE SEINER
AP Photo/Noah K. Murray
Related Stories

Are the Giants and Jets Improved?

Mets get Ruf from Giants, Givens from Cubs before deadline

Are the Giants and Jets Improved?