By: Associated Press
Hudson Valley real estate heir Robert Durst was found guilty of murder Friday night.
A Los Angeles jury convicted Durst Friday of fatally shooting his friend Susan Berman in 2000.
Prosecutors say the 78-year-old killed Berman to keep her from speaking to Westchester police about the disappearance of his first wife, Kathie Durst, in 1982.
After seven hours of deliberations and a 15-week trial, the panel of nine women and three men found the New York realtor guilty of killing Burman.
The jury began hearing evidence in March 2020 before taking a 14-month break during the pandemic. The case was picked back up in May this year.
COMPLETE COVERAGE: The Robert & Kathie Durst story
A New York police investigator took the stand and told jurors he was about to reach out to Berman when she was shot in the head.
Kathie’s family has been searching for answers in her case for decades. After this verdict, the family says getting justice for Kathie feels within reach.
In order for jurors to have found Durst guilty of killing Berman, they had to believe that he killed Kathie first in Westchester in 1982 because the charge he faced was killing a witness.
The attorney of Kathie's family sent News 12 a statement that says in part, "Not a single day goes by that we do not think about our beautiful, smart and kind sister Kathleen. Today, more than ever before, it is clear that she was murdered by Robert Durst in Westchester County. The justice system in Los Angeles has finally served the Berman family. It is now time for Westchester to do the same for the McCormack family and charge Durst for the murder of his wife, Kathie, which occurred almost forty years ago."
With Durst terminally ill and fighting cancer, there's a lot of pressure mounting for the Westchester district attorney and her cold case team - who reopened Kathie's disappearance earlier this year and classified it as a murder.
The district attorney released a statement that said, “The Westchester District Attorney’s Office commends all of those involved in persuading a California jury to hold Robert Durst accountable for the murder of Susan Berman. Our independent investigation, which District Attorney Rocah reopened shortly after she took office into Kathie Durst’s death, remains ongoing and we will have no further comment at this time."
People close to the investigation told News 12 that four people are dedicated to investigating Kathie’s case full time.
At least one source told News 12 that a charging decision could come as early as October. 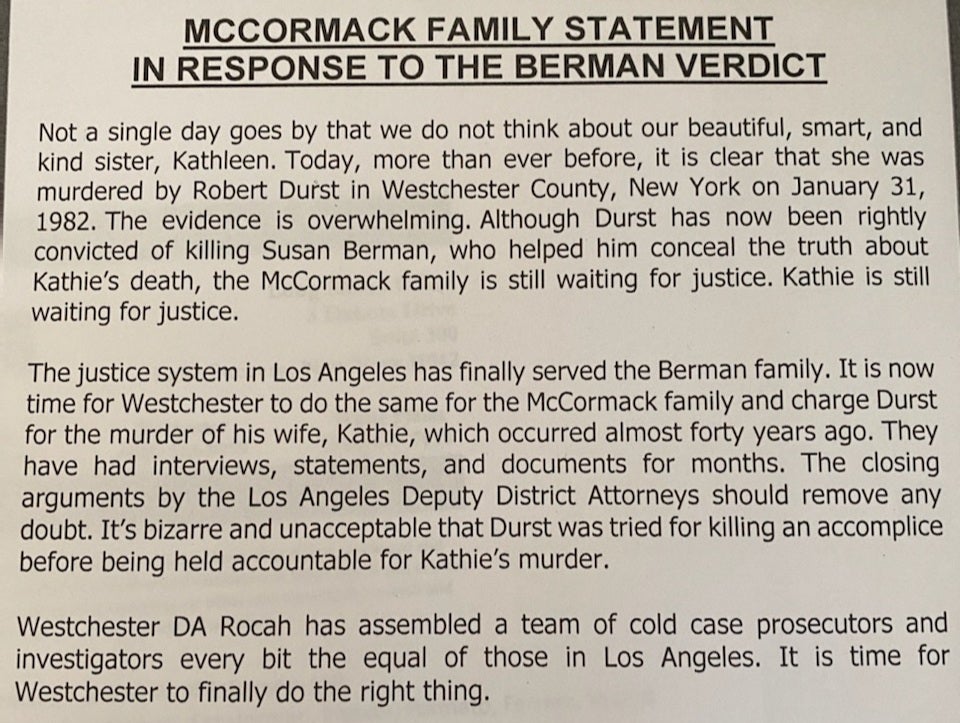 Christmas Wish: Puppy with limited use of his back legs seeks forever home