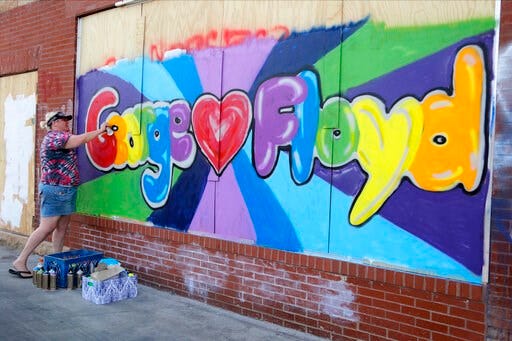 -June 1, 11:50 a.m. - Mayor Bill de Blasio addressed the various protests in New York City over the weekend and says there were many powerful moments but also incidents and behavior that will not be tolerated. The mayor said the weekend protests were peaceful for the most part, but that most of the violent or illegal incident were in the late night hours.
-June 1, 8:30 a.m. - Police officers and National Guard soldiers enforcing a curfew in Louisville killed a man early Monday when they returned fire after someone in a large group fired at them first, the city's police chief said.
-May 31, 11:17 p.m. - Atlantic City Mayor Marty Small has enacted a 7 p.m. curfew that will be in effect from June 1 to June 8.  Small says the measure will be enforced 'big time.'  The mayor also expressed is frustrations and embarrassment over the actions of some people in the city.
https://www.facebook.com/plugins/video.php?href=https%3A%2F%2Fwww.facebook.com%2Fmartysmall%2Fvideos%2F10217785854625684%2F&show_text=0&width=267
-May 31, 10:39 p.m. - Sources tell News 12 that NYC Mayor Bill de Blasio's daughter, Chiara, was arrested last night at a protest in Manhattan.
-May 31, 10:15 p.m. - Trenton Mayor Reed Gusciora says at least two police cars were set on fire and looting took place on the streets amid protests in the city Sunday over George Floyd's death.
-May 31, 8:54 p.m. - Protest activity has shut down all lanes on the Manhattan Bridge in both directions.
-May 31, 7:30 p.m. - Demonstrators have returned to the Barclays Center, two nights after violent protests began in New York City.
May 30: News 12 reporter Darius Radzius was attacked while he was reporting about the looting of a liquor store.
Share this story